What about the Family Pig Farms? Part III

I returned with Anna, my mandarin teacher, to her village for the May 1st holiday weekend. Last time I was there, we had talked about interviewing her father’s friend, who I’ll call Shushu.

Shushu is from a neighboring village where he has his own pig farm. He also buys pig feed from Anna’s family and sells it to other pig farmers in the area. However, he is best-known, and widely respected as, a livestock vet. Anna had said that if I wanted to talk to anyone about the pig farm situation, I should talk to him. 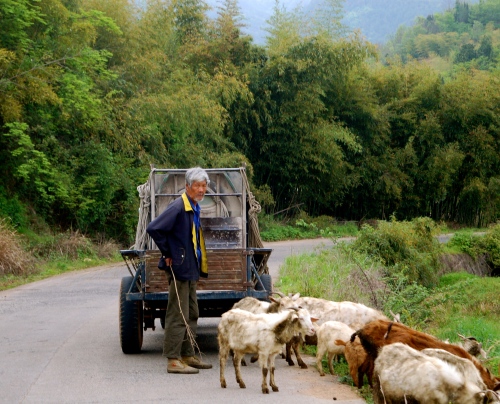 One of Anna’s neighbors herds goats near her home.

On Saturday evening Shushu came over with Anna’s ‘Auntie’ (who I spoke with during my last visit), and a few friends. After rushing upstairs to grab my recorder, we all crowded around the dining room table. I started by asking Shushu how he got into the pig farm business to begin with…

“My father was also a livestock veterinarian, so when I was 19 he began to teach me how to treat and prevent animal diseases. Then, about ten years ago, I started my own pig farm. Now, I also help small-scale pig farmers in the area sell their pigs on the market.”

“Has the pig health situation changed from when you were young?”

“Why have they become more serious?”

Auntie: “Because they raise too many pigs on too large a scale.”

Shushu: “The equipment and the scale is bigger. Before, maybe a family had only one or two pigs, but now, they have maybe 200, 400, 800. The foot and mouth disease is a problem… In the US you must have this same problem. In America, companies will give the animals a lot of bad medicine to control their growth. So they have these problems, and then China imports pigs from the US, and then the diseases infect pigs here. That is why we see that the diseases animals have now are more and more serious… Well, this is possible, but no one can say for sure which countries these problems are coming from, or who is responsible for them.”

(For some recent news reports on what he is talking about, see this Reuters article: “China halts some U.S. pork imports over feed additive use“, or this WSJ article: “China Restricts U.S. Pig Imports“)

A sign along the river by Anna’s family’s home reads: “Take care of the river environment, dumping is strictly prohibited”

Shushu: “This process is just getting started. China will copy the US. In America, the pig farms are very big. But in China, they are all small. So, the Chinese government will deal with the small pig farms first, and then they will build really big pig farms like in the US. The problem has only just begun.”

At this point I burst into cryghter (my unique blend of dry-crying laughter). Everyone thought this was funny for a minute or two; then Shushu, along with Anna’s dad and two friends, were eager to play poker and politely asked me if I could move to the couch so they could begin their game at the table.

After gathering myself and taking a seat next to Auntie and Anna, I asked Auntie what she thought would happen in the future if China copies the US and makes really big farms:

“Now we don’t know, because it is just the start. This will be a process over several hundred years. The first step is to kill the small pig farms.”

“Will you fight back, or protest?”

“If they give us money, we won’t protest. But if they don’t give us money, then we will protest because we invested all of our money in our pig farms.”

“But the pigs you raise, those can feed you for your entire life…the money the government gives you, the compensation, that only covers what you invested in your pig farm…you can’t use that to pass on to your children…”

Anna: “I know, I have also thought about this. Many people I have talked to have said they will change their job – they will go to the city to find a job, or they will start another business.”

Auntie: “We haven’t thought yet about how to deal with this, because they haven’t decided to give us money. Later we will decide…”

The key to understanding exists at the nexus where self-interest and practice meet power and policy; I explore this nexus through participatory field research.
View all posts by elenakayes →
This entry was posted in Zhejiang Province and tagged climate change, environment, local government, rightful resistance, rural China, Zhejiang. Bookmark the permalink.