The Beginning! (for real)

Posted on September 9, 2013 by elenakayes

I made it! I left on Sept 1st and arrived in Hangzhou on the 3rd. The 2nd was my (and my twin’s!) 25th birthday. I slept through most of it, which has become my post-23 preferred method of celebrating anyway.

When I left the airport I was feeling proudly independent as I shrugged off some assertive taxi drivers, hailed my own cab, recited the address for the university without looking it up, and eventually registered and checked into my dorm all on my own. However, when I checked my email that night I had some anxious messages in my inbox from my program’s student coordinators who had been waiting for me and expected to meet me upon my arrival. That now adds up to at least a dozen +1 lessons that my secret tendency to demonstrate (to really no one but myself) my aptitude for doing things on my own is often more detrimental than beneficial. Fingers crossed my effusive apologies counteracted my first impression.

Dorm life will deserve it’s own post, so I’ll write more about that later. But for now I’ll just say I have a dorm mate who is from South Korea, so we only speak Mandarin, which is awesome because my desire to practice makes me way more outgoing than the English-speaking version of myself.

Last week was a run-around of various settling-in chores that aren’t really worth writing about. I’ll just briefly say that 50% of my time was spent getting a paper from one office, taking it to another office for some signature/stamp of approval before bringing it back to the original office. I’m still only half-way through my bureaucratic-run-around-to-do-list. This week I will attempt to confront the biggest hurdle as I have to take my physical examination form for approval at the university hospital, then bring it to the head of my program to get some other approval form, and then take that with my passport/visa to register at the police station. A few students attempted this feat on Friday, and after finally waiting in line for a few hours at the police station were denied for some red-taped reason or other. We have 30 days to do it, so it’s really just a pain more than a source of anxiety.

Here’s me on my new bicycle. I picked this lucky winner out of the bunch by asking the bicycle-shop-owner which one was the least likely to get stolen.

I’ll also just add that another 30% of my time was a cellphone albatross: in short, at&t is an ogre*, and if anyone knows how to subversively unlock a phone, I’ll send you an awesome pair of chopsticks monogrammed with your initials.

To celebrate my last day of pre-class freedom, this morning I went for a hike. In case anyone associates hiking in China with any rugged preconceptions, let me just say that 99% of the time you are not on a trail, but are walking up stairs set in the side of a mountain: 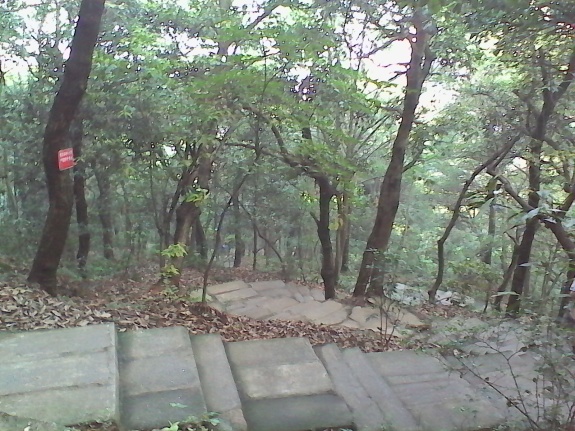 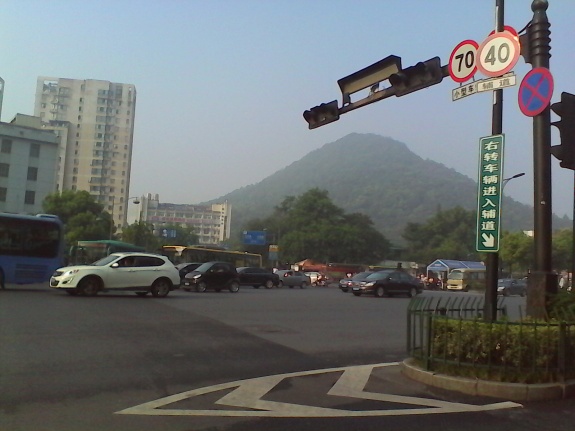 Here’s the mountain. In my pre-dorm China life, I lived in that tall building on the left.

Here’s the mountain. In my pre-dorm China life, I lived in that tall building on the left.

It only took about 30 minutes to climb to the top. Once I got up there I remembered there is path that follows a succession of hillsides behind it, so you’re free to meander for a good 3-5 hours. 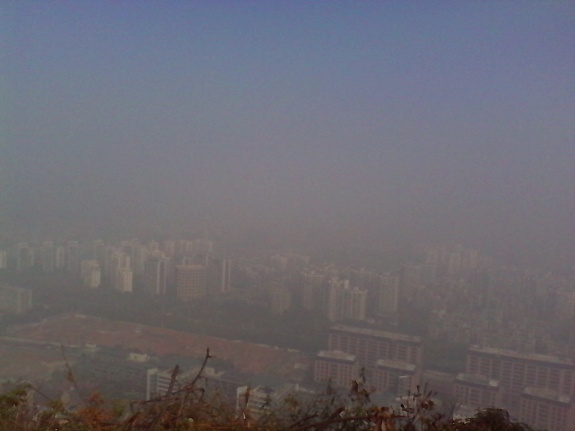 Left: a view from the top overlooking one of Zhejiang University’s campuses. Right: a view overlooking a side of the city adjacent to the campus. This was not a cloudy day, but really just the status quo. Nevertheless, I’d still take the pollution in Hangzhou over Shanghai or Beijing any day.

While hiking along the top I stopped to ask a girl about my age to help me take a photo, but instead ended up making a new friend. Her name is Shi Mei Li, and she works in something like a fiber optics factory here in Hangzhou, but she grew up in Fujian and her parents now live in Shanghai. After the usual exchange of where we’re from/what we do I jumped into questions on my favorite topic, China’s rural land-use system. My preferred method for expressing my curiosity is simply saying I’ve heard they have a different system than what we have in the US, and then wait for an elaboration. Shi Mei Li said yes, individuals cannot own land, but it is owned by the government**, and rural families have the right to farm it. Most rural families are poor, and so they will go to the cities to find some form of work while returning home for the harvest seasons. She said she believes the system where the government owns the land is better to take care of the environment, but that also farmers in America are not as poor as those in China. I replied that it is true that they are not as poor, but that rather than every individual having a piece of land to rely on, there are also just a few large agricultural businesses that make a lot of the profit.

I then asked what she thought– if rural farmers had a choice to sell their land and permanently move to the city, would they take it? She said that it is very complicated, in the cities the education and medical care is better, so when they are thinking of their children that is what they would choose, but when they arrive in the city they would face many financial challenges and it would be very difficult to find permanent full-time employment (in China there is what is called the hukou status: the government divides citizenship between urban and rural, if a rural citizen wishes to move to a city without an urban hukou, they must pay more for education for their children and for medical fees). However, in Shanghai she explained that they recently changed the hukou system and citizens with a rural hukou are no longer going to be subjected to these additional fees, but her father had to pay more for her education when her family moved to Shanghai.

Our conversation meandered as we walked, and after talking about a friend she has that does not get much time off because he does some work related to the government and the police, she said that many people in China do not approve of the government. It is better when you can at least make a comparison, she said, but here we have nothing to compare to, we only have this one party.

I replied that in the US there often seems to be this idea of China that you cannot say bad things about the government, even when discussing with your friends, but she laughed and asked why would people think that? Of course we can say what we want to each other, but we cannot go to a government representative and say these things. In the US you can go to the government and ask questions and expect answers, but here we cannot ask questions and there is no transparency. I said that the US is not like the situation in China, but transparency has also been an issue for us, like with drones (in case you’re wondering, I do not know the Mandarin word for drone, instead I said “like this plane that flies and kills people but no one is inside the plane”, but she said she knew what I was referring to). This is something the President has said he will tell us about, I continued, but still we know very little.

We covered topics from school life and the dreaded gaokao (the university entrance exam every senior must take– I’ll cover it more in later posts) to China’s plethora of dialects (she speaks 3- Shanghaihua, and two others from her hometown) and our struggles studying English/Mandarin, to our families and plans for the future.

When we arrived back at the bottom of the mountain where I had parked my bicycle, we exchanged numbers and made plans to meet again one weekend soon.

Side note: I am omitting quotation marks because I do not want to assert that what I write is an exact, word-for-word translation of what someone said, especially without having taken notes during our conversation.

The key to understanding exists at the nexus where self-interest and practice meet power and policy; I explore this nexus through participatory field research.
View all posts by elenakayes →
This entry was posted in Zhejiang Province and tagged Zhejiang. Bookmark the permalink.

1 Response to The Beginning! (for real)